Randweg A2 | Eindhoven | The Netherlands

People living around the Highway A2 in Eindhoven will anew enjoy quiet and restorative nights. The traffic around and through Eindhoven had increased to such an extent, that at the beginning of the 21st century the traffic jams of Eindhoven were every day among the top three in the Netherlands. Consequently, the Rijkswaterstaat, the public administration in charge of the Dutch infrastructures, not only launched a widening of the highway, but created a second parallel road that will separate the local traffic from the transit one.

The Eindhoven area is very densely populated. A key part of the project therefore consisted in constructing around 16 km of efficient noise barriers in order to reduce the nuisance of the increased traffic on the vicinity. The landscape was quite unfavourable for such a widening of the highway, as on some sections significant level differences occur between the highway and the local area. The easiest way to overcome these level differences without loss of space was the use of sheet piling retaining walls.

In order to optimise the noise reduction the sheet piles needed to be installed with a small batter angle, resulting in an interesting challenge for the driving contractor. The driving at an angle was easily solved by using a small wooden template that assured the correct angle, but the sheet piles could not follow the curvature of the road without some corrective measures. The difference in linear meter of the wall between the top and the bottom of the bended wall would have created too much lean. This was finally compensated by welding tapered plates in-between every set of three to four pairs of sheet piles, depending on the radius of the bend.

A similar solution was used to work around another unexpected issue. At design stage it was assumed that the thermal dilatation could be balanced out by some play in the interlocks. But on the first warm period after the installation of these very long noise barriers the sheet piles seemed to deform more than predicted. Dilatation joints were executed at regular intervals to balance the temperature fluctuations. The sheet piles were simply cut vertically and a plate was welded at their back on one side, allowing the wall to deform longitudinally

The installation of the piles proceeded with the road works. The soil layers consist of loose to medium dense sand. Mainly AZ 13 sheet piles were used, with lengths ranging from 2 m to 14 m. They were driven with a light vibratory hammer ICE 7RF. The positioning of the prefabricated capping beam required precise driving work but further accelerated the completion of the wall.

From April 2007 to July 2010, some 14 600 t of steel sheet piles were installed for roughly 10 km noise barrier wall which helped transforming tomorrow for all the people living in and around Eindhoven. 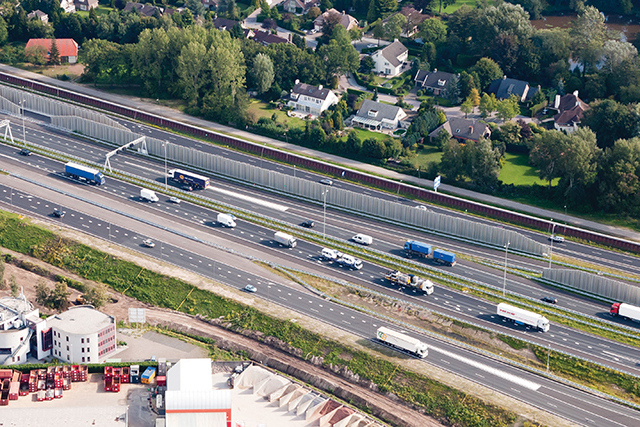